Sweet as Cane, a debut novel from Stephanie McCoy

Posted on September 7, 2012 by sirpasalenius

Sweet as Cane, Stephanie McCoy’s debut novel, is set in an insignificant small Southern town of North Carolina called Marrow. Not an easy place to grow up in. To quote Winkie Jr.: “You have to be very careful in this town…It is a trial to be a man in Marrow.” 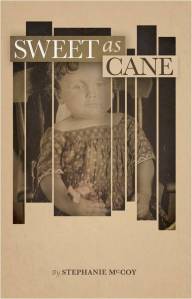 The name of the location brings to mind bone marrow, the essential part of a human being. But the word also means strength, vitality, or essence, while, according to a reference dictionary (dictionary.com) in Scotland and North England it is used to signify a partner, fellow worker, spouse, or a close friend. The themes of the novel develop around the characters, their strengths and weaknesses, their “bone marrow” and essence, their friends, partners, and spouses—all somehow borderline between normalcy and insanity. Yes, there seems to be something mentally unhealthy about them, their relationships and interactions with one another. They seem wrapped around each other, their lives are entangled with those of their neighbors. Their existence rotates around the local cemetery; their talk spins around the protagonist, Cane Walker, supposed to be as sweet as sugarcane. Life is entwined with death and nothing is what it seems in this Southern town where young disfigured Cane learns about love, lust, and desire while working next door to her mother’s Sweet Hereafter Funeral Home as a photographer of infant postmortem portraits.

Sweet as Cane, or the story of Marrow, is told from a continuously shifting viewpoints as each character is given a chance to voice their fears, hopes, and superstitious beliefs; they all have some secret to add to the rumors circulating the 1950s Marrow. The dark side of every character dominates their lives, in this unsettling narrative about Marrow and its residents, whose language is said to be gossip. As they sip their sodas, they spy on each other and gossip about the pitiable lives of others; their talk is about vegetables and human life rotting in the Southern heat.

Sweet as Cane turned out to be a wonderful new discovery from Stephanie McCoy, who excels in masterful use of language as she explores the darker side of human marrow.

This entry was posted in Books and tagged Books, debut novel, Southern fiction. Bookmark the permalink.

4 Responses to Sweet as Cane, a debut novel from Stephanie McCoy